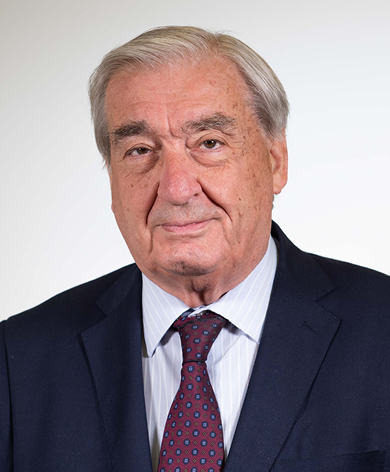 Piergiorgio Picozza is Professor Emeritus of the University of Rome Tor Vergata, where he was Full Professor of Nuclear and Subnuclear Physics until November 2011 and coordinator of the PhD in Physics.

Piergiorgio Picozza's scientific activity has been carried out for many years in the field of Nuclear Physics and Elementary Particles at accelerators, and has been oriented to the study of the structure of the nucleus, the research of new elementary particles, the verification of laws of invariance of particle physics.

Since the second half of the 80's his research has been mainly focused on the field of astroparticle physics in space, with the realization of numerous experiments on cosmic rays in international collaborations directed by him. In this context are inserted the observations on stratospheric balloons conducted from 1989 to 1998 for the research of primordial antimatter and, since 1993, the international program RIM (Russian-Italian Missions). In the framework of RIM, he led the NINA1 and NINA2 missions on board satellites to study the nuclear and isotopic components of low energy cosmic rays and the solar activity, and the PAMELA mission, in orbit between 2006 and 2016.  Of particular importance have been the results achieved with the PAMELA magnetic spectrometer in the research of antimatter and dark matter signals, on the mechanisms of production, acceleration and propagation of cosmic rays in the Galaxy, on solar activity. A radiation belt around the Earth composed of antiprotons has also been discovered.

As part of the RIM program, Piergiorgio Picozza has also led researches in the field of life sciences with the three SI-EYE missions dedicated to the measurement of the radiation environment inside the MIR and ISS Space Stations and to the study of the effects of ionizing radiation on the central nervous system of astronauts in space. He was also one of the promoters of the AGILE experiment for the study of high-energy gamma radiation.

Currently, he is the Principal Investigator of the international collaboration JEM-EUSO, with an extensive program dedicated to the detection of high-energy cosmic rays and to the study of atmospheric phenomena with experiments both on stratospheric balloons for long-range flights, and inside and outside the International Space Station and on satellites. He also leads the Italian-Chinese program CSES-Limadou for the study of lithosphere-ionosphere-magnetosphere interactions, with particular attention to possible premonitory events of earthquakes, by detectors on board the satellites CSES-01, put into orbit in February 2018, and CSES-02, under construction.

He received with the AGILE collaboration the Bruno Rossi Award from the American Astronomical Society for researches in the field of high energy astrophysics and the 'O Ceallaigh' medal from IUPAP for the relevant contributions given to cosmic ray physics.

He is a distinguished member of the Italian Society of Physics. He is author of over 600 publications.