2021 is increasingly “green, white and red”: the Nobel Prize in Physics goes to Giorgio Parisi

“We live in a world that confuses us with its complexity. We want to understand what we see around us and ask ourselves: What is the nature of the universe? What is our place in it? Where did the universe originate and where do we come from? […] A complete theory, it should over time be comprehensible to all in its general principles, and not just to a few scientists. All of us - philosophers, scientists and ordinary people - should then be able to participate in the discussion of the question of why we and the universe exist. If we can find the answer to this question, we will decree the definitive triumph of human reason "

-Stephen Hawking, book From the big bang to black holes. A brief history of time-

These are the words that, most of the time, accompany the day and the desire for discovery of the people who dedicate their lives to research. Yes, because Prof. Giorgio Parisi, Nobel Prize in Physics 2021, before being a professor, before being a candidate (with what it takes to win) for one of the most coveted awards in the academic field, is a researcher. A hungry for knowledge, a well of questions that hardly dries up because the complexity of nature, of our universe never stops feeding it.

Thus reads the contextualization phrase that usually accompanies the awarding of the Nobel Prize, "for the discovery of the interaction between disorder and fluctuations in physical systems from atomic to planetary scale", which this time accompanies the name of an all-Italian mind, Giorgio Parisi.

Prof. Parisi was full professor of Theoretical Physics at the Physics Department of University of Rome "Tor Vergata" in the 1980s and in those years he completed some of the fundamental studies that earned him the Nobel 2021.

A very close link was created between Prof. Parisi and the Physics Department of the University of Rome "Tor Vergata", perhaps due to the "dynamic" (to use a pun) and stimulating environment, for the quality of research and the quality of the minds that daily question themselves about how every aspect of reality works.

A solid research group on complex systems has grown up around Prof. Parisi here at the University of Rome "Tor Vergata", which includes Prof. Benzi, who worked and works on many of the issues developed in the period in which Parisi he was a young Full Professor, ranging from the behavior of glassy systems to turbulence. These and many other interactions born in our Department. This important and well-deserved recognition to our friend and colleague Giorgio Parisi is also a recognition for the long collaboration that binds Giorgio to our University. 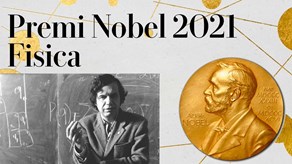