LA FISICA IN UNO SCATTO: because the only filter allowed is that of Physics!

The first edition of the contest "LA FISICA IN UNO SCATTO" offered by the Physics Department of the University of Rome Tor Vergata ends, giving you an appointment at the next edition!

The competition was conceived and edited by the Social Media Manager of the Physics Department of the University of Rome "Tor Vergata", Dr. Alice Aldi.

The competition provided that anyone could send a photo that portrayed or made one think of the subject of physics that was published weekly, for twelve weeks, on our official social channels.

With the end of the first edition of the competition, all winners and those who request it by sending an email to fisicaunitov@gmail.com, will receive a free poster created specifically by the designer Eleonora Marra.

We look forward to seeing you for the second edition! "Because the only filter allowed is that of Physics!" 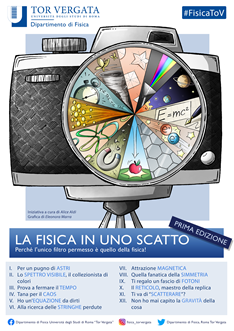